Home Featured Where Will Aurora Cannabis Be in 10 Years?

Buying and holding stocks for lengthy periods of time is arguably the best way to produce top-notch returns on capital. Nevertheless, long-term investing isn’t without its own particular risks. In order to generate market-beating returns over a period of, say, 10 years, investors need to have a firm grip on a company’s underlying fundamentals, core value creation strategy, as well as the long-term outlook for its industry as a whole…

Aurora Cannabis (NYSE:ACB) is a highly diversified Canadian marijuana cultivator, distributor, and innovator. The company currently sports the highest production capacity potential among Canadian licensed producers, one of the broadest international footprints in the entire industry, and an integrated value chain that creates numerous synergies across its broad cannabis-oriented business. So, with global cannabis sales forecast to rise to anywhere from $75 billion to upwards of $200 billion by 2030, there’s definitely a solid rationale backing up Aurora’s long-term investing thesis.

Should investors consider this top Canadian pot stock for their long-term portfolio? Let’s consider where Aurora might be in 10 years’ time to find out.

Aurora as a long-term investment

Aurora’s long-term goal is to build a bulkhead in three specific areas of the emerging legal cannabis industry: medical cannabis, recreational-use cannabis, and hemp-derived CBD. On the surface level, the company’s stated business plan essentially mimics other leaders in the space such as Canopy Growth (NYSE:CGC) and Tilray (NASDAQ:TLRY). The difference among the early pioneers lies in their execution.

Aurora, for its part, has developed state-of-the-art cultivation technologies at its Sky Class facilities, which can produce premium-quality cannabis on a consistent basis. The company has also developed an intriguing vape pen platform, top-quality concentrates, and an attractive lineup of edible products that include chocolates, cookies, gummies, and mints. The key takeaway is that Aurora can at least match peers like Canopy and Tilray in terms of scale, operational efficiency, and product offerings at this stage of the game.

Where it falls short is on the financial side of things. Because Aurora didn’t go the big-partner route like Canopy, the company has had to dilute early shareholders in a big way to build its horizontally and vertically integrated business. Aurora’s outstanding share count, in fact, has risen at an alarming rate over the past few years compared to that of its peers like Canopy and Tilray. 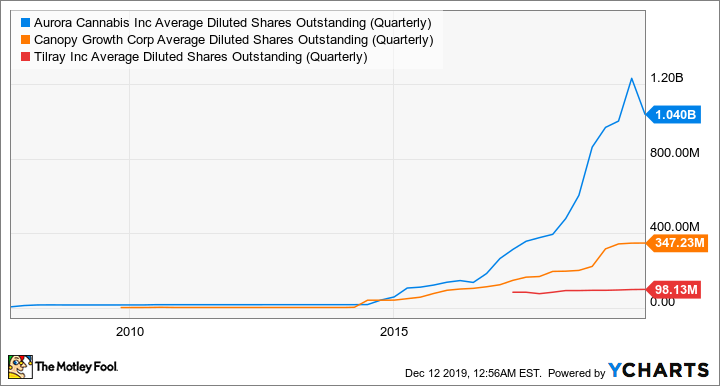 Despite its skyrocketing share count, though, Aurora still doesn’t have a clear launching point into the American medical or recreational cannabis markets. That puts the company at a serious competitive disadvantage relative to both Canopy and Cronos Group — both of whom have Fortune 500 partners with the vast commercial infrastructure and expertise necessary to expand quickly into the American market, once it becomes federally permissible to do so.