Marijuana stocks had a rough 2019. The Horizons Marijuana Life Sciences ETF (OTC: HMLSF) fell 39% last year as the S&P 500 rose by 29%. The honeymoon stage for the cannabis industry is long over. And although the outbreak of the coronavirus isn’t going to do the industry any favors this year, the reality is that marijuana stocks were going to face problems in 2020 either way. It’s a year that will…

separate the pretenders from those that will be around for years, and it’s not going to be an easy one for many companies. Here are some of the things investors can expect to see in 2020.

Layoffs and cost reductions wherever possible

Aurora Cannabis (NYSE:ACB) made headlines in February when it announced that not only would CEO Terry Booth be stepping down, but also that it would be cutting 500 jobs. It also wrote down more than one billion Canadian dollars’ worth of assets, including goodwill, from its balance sheet.  It was a big blow for the pot stock, which was once a key rival of industry leader Canopy Growth (NYSE:CGC). And even Canopy Growth had its own round of layoffs, when it announced in early March that it would be letting go of 500 workers and shutting down two of its greenhouses.

These are two of the bigger, more notable cannabis companies in the industry, and these decisions happened before the coronavirus pandemic really took center stage. That means we’ve likely seen just the first wave of job cuts, as companies in the industry are going to face even more pressure to trim their costs as much as they can in what’s likely to be a very difficult year for economies around the world.

Smaller cannabis companies are facing even bigger problems, as many are still in their early growth stages. Raising cash, for instance, is going to be more difficult going forward. To say that investors are bearish on pot stocks would be a gross understatement, as 90% stock losses over the past year aren’t uncommon. 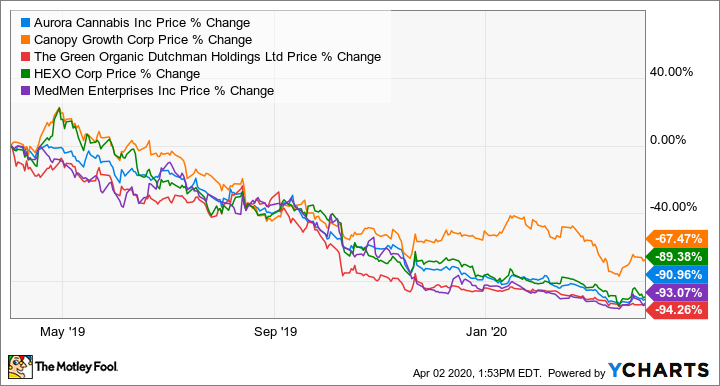 That’s where being self-sufficient and keeping costs down is going to be more important than ever before.

In February, Kentucky-based hemp producer GenCanna filed for bankruptcy . And that may be just the first of many this year for the industry.

A full year of legal edibles and ingestibles in Canada, along with more states in the U.S. legalizing pot, was supposed to make 2020 a stronger year for the cannabis industry. But with the coronavirus pandemic creating job losses and lots of instability in the economy, the recreational market for pot is bound to suffer. And with revenue growth out of the question, the one option left for companies who need to conserve cash is to continue slashing their costs.

That’s why more layoffs are likely in the future, and cannabis companies will need to operate tighter ships if they want to be operating at all. But the problem is that there may not be enough time. Investment bank Ello Capital already saw many cannabis companies struggling with liquidity pre-coronavirus — in February, for example, it calculated that Aurora may only have enough cash on hand to continue operating for a little more than two months.

Bankruptcy may be the only option at this point, as companies are moving away from acquisitions rather than pursuing them, despite the potential targets’ low valuations. Harvest Health & Recreation (OTC:HRVSF) announced on March 26 that it was walking away from an $850 million acquisition of Verano Holdings. The companies initially announced the deal in March 2019, but both companies have since agreed to abandon it, blaming the challenges in getting the necessary regulatory approvals and “current market conditions.”

Although valuations may be low, companies have to be extra careful in deciding where to spend their limited cash. And issuing shares at a time when pot stocks are crashing is not going to win over many investors, either. That’s why there may not be many mergers and acquisitions this year to bail out struggling pot stocks — again, leaving bankruptcy as possibly the only option.

A good example of that is CannTrust Holdings (NYSE:CTST), which entered creditor protection on March 31. The company acknowledged that its shares will likely soon be delisted from both the NYSE and the TSX. CannTrust’s fall was predictable, given that Health Canada suspended its license to sell pot last year after officials found that about its illegal growing operations. But what may be more surprising is that no one acquired the company for its assets. Aphria (NYSE:APHA) did show an interest in CannTrust’s assets, but nothing materialized from that.

What does this mean for investors?

The days of cannabis companies aggressively pursuing growth opportunities and…