Two years ago, in October 2018, Mexico’s Supreme Court ruled that an absolute ban on recreational use of marijuana was unconstitutional, setting the stage for lawmakers to legalize the once-taboo drug…

By a lopsided vote of 316 to 129, Mexico’s Chamber of Deputies voted to legalize recreational marijuana last week. The vote now heads to the Senate this week, where it’s expected to sail through.

Considering that multiple Senate leaders have already expressed intentions to back the Chamber of Deputies, it looks like we are only days away from weed being fully legal in Mexico.

And now… that leaves just the United States of America.

Canada legalized marijuana back in 2018. Mexico is legalizing it right now in 2021. So, by mid-year, the U.S. will be the only North American country without federally legal weed.

That won’t be true forever…

Feeling the pressure of having weed legalized both north and south of them, U.S. lawmakers are making a big push for comprehensives cannabis reform legislation right now.

Does that mean federally legal weed is just around the corner for America? No. Legalized marijuana at the federal level is still a long way off.

It does, however, likely mean decriminalization is just around the corner. With that, I suspect recreational marijuana will become quasi-legal in a hurry in most states in the U.S.

Meanwhile, up in Canada, the government is finally figuring out — via looser restrictions, lower taxes, easier access, and wider inventory — how to shift cannabis’ black-market demand into legal channel demand.

If you look at the trend, this appears like an important inflection point wherein the legal market is positioned to take over the illegal market. 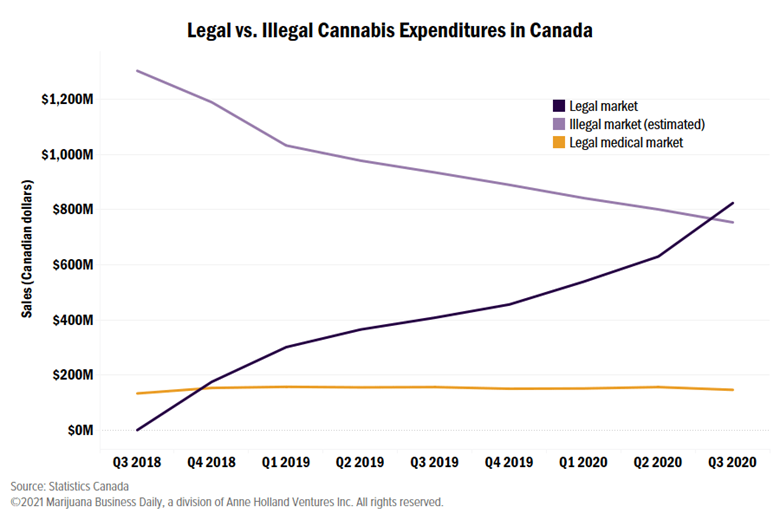 Moving over to Europe, countries like Poland and Ukraine are inching closer toward cannabis legalization.