Home Featured Should You Buy Canopy Growth in April?

One of the best axioms about investing is that you should choose the leading companies in the fastest-growing industries to maximize your chances of success. But what’s the right move when there are no clear industry leaders? Take the world of the cannabis industry, where unprofitability, 90-degree turns in corporate strategy, and crazy-fast revenue growth all the while are the norm…

Canopy Growth (NASDAQ:CGC) is struggling with many of the same issues as its competitors, though it could have a competitive advantage in the form of its increasing focus on the marijuana beverages segment of the recreational market. It should go without saying that this stock isn’t the best choice for investors who have a low tolerance for risk. But, if you’re willing to purchase a stock that has yet to demonstrate its ability to operate consistently in the long term in exchange for high growth potential, it could be right up your alley.

In my view, Canopy has taken necessary action to address some of its most persistent issues, namely its unprofitability. Over the last three years, management has cut costs and improved production efficiency, causing its selling, general, and administrative (SG&A) expenses and its cost of goods sold to fall sharply as a percentage of total revenue by 41.43% and 65.17% respectively.

At least some of these shrinking expenses stem from the company’s closure of several under-performing production facilities. It has another $150 million in cost savings scheduled to take effect over the next year.

While the company still isn’t profitable without making allowances for fluctuations in the market price of cannabis, CFO Mike Lee sees profitability on the horizon in FY2022. And positive earnings and free cash flow are slated to follow in the two years afterward. Given that by its financial calendar it’s currently in late fiscal year 2021, Canopy could start posting consistent profits in less than a year. That will supercharge the stock while also securing the company’s future through the middle of the decade.

In the midst of these fruitful cuts and performance optimizations, sales are expanding, and its market share is rising. Per its latest earnings report, net sales grew by 23% year over year. In the U.S., its Martha Stewart brand of cannabidiol (CBD) products outsells 94% of other CBD brands, making it the most dominant one by far. In Canopy’s home market of Canada, it owns a 15.7% and growing share of the recreational cannabis segment by revenue.

But that’s not all: Management predicts that net revenue will grow with a compound annual growth rate (CAGR) of up to 50% over the next three years. Still, investors may rightly be wondering if Canopy can actually execute on these ambitious plans. 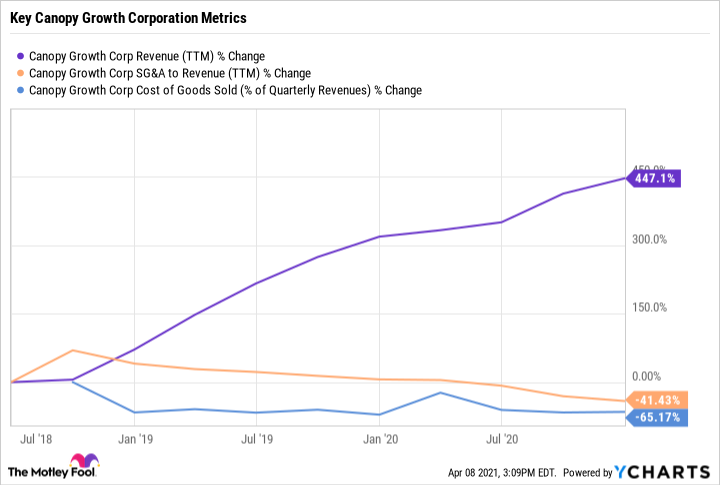 Cautious investors will prefer to wait

There are a few things that should give potential buyers pause, especially if they typically prefer investing in established businesses with fewer growing pains. First, the company’s sales mix in Canada is currently 80% dried marijuana flower, though management has signaled that this will be changing over time. There’s nothing inherently wrong with that, but dried flower is the least lucrative segment of the cannabis market, because there aren’t many opportunities for companies to add value by processing the plant further to make vaporizer fluid or edibles.

In other words, it doesn’t sell for much per unit, so Canopy needs to move vast volumes of cannabis to break even. And, if it wants to expand, it’ll need to do so in ever-increasing quantities. That’s a problem, considering that its dried flower revenue in Canada dipped by 4% year over year in its most recent earnings report from third-quarter FY2021, which adds pressure to increase sales in other segments.

Then there’s the issue with free cash flow. While it’s true that Canopy’s quarterly free cash flow is moving in the right direction year over year, from quarter to quarter the picture is less clear. Cash from operations dipped below the…