Home Featured Is Aurora Cannabis About to Become a Micro-Cap?

About two years ago, Aurora Cannabis (NYSE:ACB) was considered one of the most promising marijuana companies. The pot grower was only second to Canopy Growth (NYSE:CGC) in terms of market cap at the time…

Things have changed quite a bit since 2018. Canopy Growth remains the largest pot company by market cap, but several of Aurora Cannabis’s peers have surpassed it in this category, including the likes of Aphria (NASDAQ:APHA) and Cronos Group (NASDAQ:CRON).

As of Oct. 27, Aurora Cannabis’s market cap stands at $517 million, which, at first glance, seems a good distance away from micro-cap status (i.e., companies with market caps between $50 million to $200 million). But after sliding by almost 90% in the past 12 months, it’s not unreasonable to think that Aurora Cannabis could end up dropping below the micro-cap level within a year. Can the company stage a comeback before that happens? 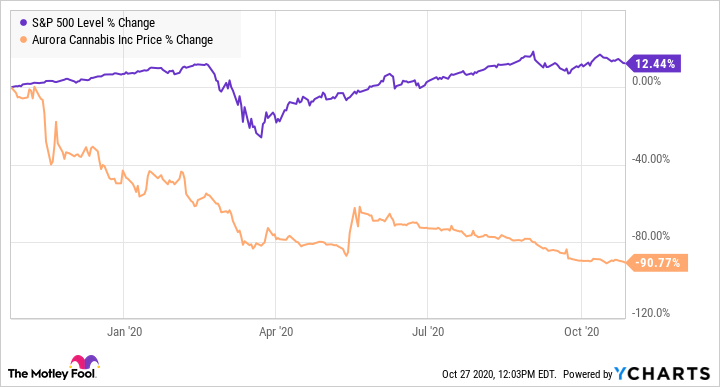 What happened to Aurora Cannabis?

Several factors led up to Aurora Cannabis’s struggles over the past year. First, the company pursued an aggressive growth strategy in its early days. The pot grower went on an acquisition spree to extend its footprint in the marijuana market. In a deal that closed in July 2018, the company acquired Canada-based MedReleaf in an all-share transaction valued at CA$3.2 billion. More recently, Aurora Cannabis made a move to enter the U.S. cannabidiol (CBD) market by acquiring Reliva for $40 million worth of its common stock, in a deal that closed in May.

As a result of these (and other) acquisitions, Aurora accumulated a ridiculous amount of goodwill on its balance sheet. Goodwill is the difference between the purchase price of a company that’s being acquired and its market value. Write-downs of goodwill can harm a company’s bottom line (more on this problem below).

Second, the market conditions in Canada…