Home Featured How Did Cannabis Stocks Perform in September?

The Global Cannabis Stock Index gave up all of its gains from July and August to end Q3 down 6.7%, decreasing…

The index, which had 37 qualifying members during the month (Acreage Holdings was removed late in the month after its corporate action resulted in its stock being split into two new stocks) following the quarterly rebalancing at the end of June, declined 34.1% in 2019 to 42.20 and is now down 35.0% in 2020: 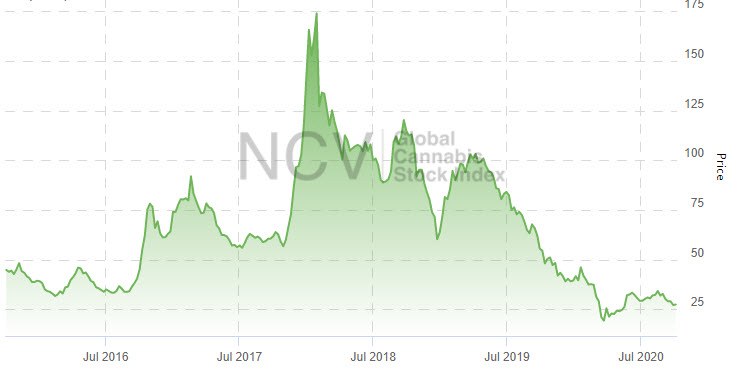 The strongest 4 names in September, all of which trade on higher exchanges, failed to generate significant gains:

22nd Century Group, which is more leveraged to tobacco than cannabis, has declined 42% in 2020. Innovative Industrial Properties, which has rallied 64% this year, announced additional projects in Michigan and Florida during September and also boosted its dividend by 10%. Executive Chairman Alan Gold made a substantive sale, disposing of 5000 shares at $125.08

The best performer in August was GrowGeneration, which sold $48 million of stock in a public offering at $5.60 in late June and then soared to an all-time high of $22.88 in July before a short-report was published. During August, several analysts boosted their targets. GrowGen is up 290% in 2020. Power REIT, which is up 120% in 2020, has been expanding its presence in the industry, including additional projects in Colorado and Maine  announced during September.

The 4 weakest names fell by more than 33% in September:

Aurora Cannabis, which ended September down 82% year-to-date, fell sharply after its Q4 earnings report. Mydecine ran up in May and continued its downward trend from early June during September. Akerna saw the founder of a company it recently acquired quit abruptly and issue criticism. Additionally, its Q4 financial report was disappointing, as revenue fell sequentially and from a year ago due to COVID-19 issues, according to the company. Akerna has declined 57% in 2020. Green Organic Dutchman, which is down 65% this year, sold stock late in the month.

The rebalancing process for Q4 resulted in the addition of six companies and the removal of ten, leaving the index with 32 members. The criteria used for the rebalancing were the same as for Q3, with stocks required to have a minimum price of $0.25 and to have average daily traded value in excess of $500K.

The added names include…