Home Featured How Did Cannabis Stocks Perform in January?

After soaring 62% in Q4, the Global Cannabis Stock Index began the new year with a 27.8% gain to… 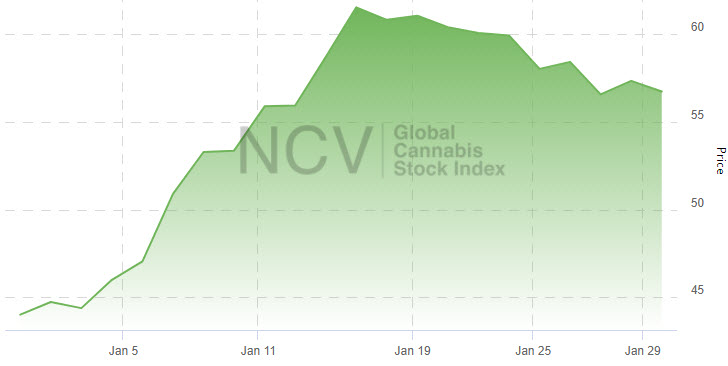 The index, which had 38 qualifying members during the month following the quarterly rebalancing at the end of December, increased 5.2% in 2020 to 44.39: 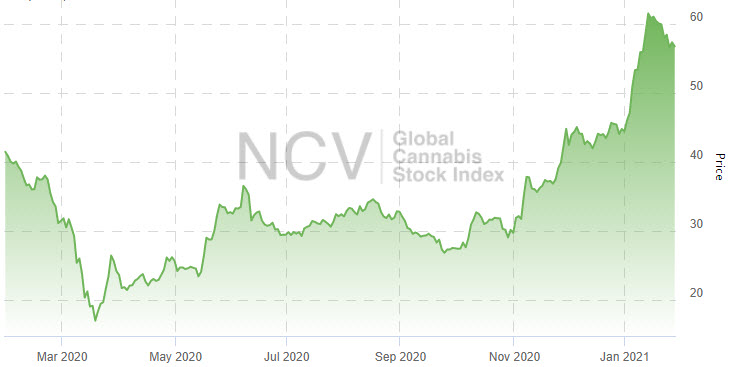 The strongest 4 names in January all gained at least 76%:

The driver of the best performing stocks seems to have been the change of control of the Senate. Tilray, which led the way, was part of a very strong performance by the largest Canadian LPs. The company, which is being acquired through reverse-merger by Aphria, has traded above the price implied by the deal. Acreage Holdings tracked Canopy Growth but also saw the very steep discount to the price implied by the renegotiated “plan of arrangement” narrow as traders bet that the consummation could occur more quickly than previously expected. Each share of Acreage would be converted into .3048 shares of Canopy Growth at the time of acquisition. Akerna, which like Tilray and Acreage declined substantially in 2020, had no substantive news during the month. Aphria reported its fiscal Q2 during January, which helped extend its strong gains since the elections in November.

The 4 weakest names in January ranged from unchanged to down 17%:

Taat Lifestyle and Wellness, which is focused on tobacco-free alternatives to cigarettes that contain CBD, expanded distribution in Ohio, its first market, during January. PharmaCielo, which just joined the index at the end of December, retraced some of its strong Q4 gains. Planet 13, which priced its fourth equity offering since the summer during the month, also consolidated some of its recent gains. Clever Leaves, which…