If popularity translated to solid performance in the stock market, Aurora Cannabis (NYSE:ACB) would be one of the best marijuana-related investments around. The pot grower has been a regular on the list of the 100 most popular stocks on the trading app Robinhood, but the notoriety hasn’t helped its business. Over the past year, the company’s market cap and stock price have both declined by more than 75%. In all fairness, the entire marijuana industry has struggled and…

even the top dogs are anxiously awaiting better days.

The market for cannabis will expand significantly if more countries opt to legalize recreational use of marijuana for adults. Aurora Cannabis stands firmly in a position to benefit from such a situation. Of course, a legalization scenario in the United States is far from guaranteed. Still, the sector has made significant progress over the past three years. Canada has legalized recreational marijuana and edibles, and the U.S. has legalized hemp and hemp-derived products. It is safe to say that general public perception, normal medical recommendations, and government attitudes are all trending toward legalization.

But even if favorable laws sweep the globe, Aurora Cannabis isn’t the company investors should pick to get their feet wet in cannabis — at least not until it treats the following two issues. 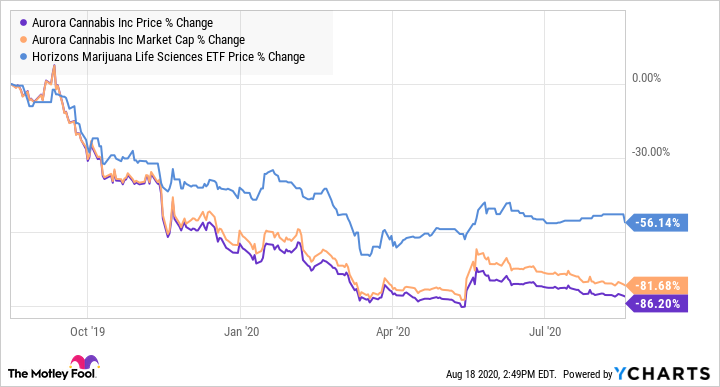 Relying on dilutive forms of financing is not ideal, but in the early stages, many pot companies have had no choice but to give up some ownership. Since those early stages, some pot stocks have managed to team up with established corporations that have given them access to cash to expand their operations. Canopy Growth, for example, found a partner in Constellation Brands. In 2017, the beverage maker acquired a 9.9% stake in Canopy for 245 million Canadian dollars and in May, Constellation upped its stake to 38.6%.

Just like its competitors, Aurora Cannabis understands the importance of finding a larger corporation to team up with. That’s why investors rejoiced when the company retained the advising services of billionaire investor Nelson Peltz in March 2019. Peltz was hired to line up potential partnerships that would grant Aurora Cannabis access to the market segments where cannabis is positioned to disrupt business.

But more than a year after the hire, Aurora Cannabis has yet to land a partner that matches the caliber of Constellation Brands. The marijuana company could go on to be successful without a devoted teammate. But in my view, Aurora Cannabis will have a hard time competing with its similarly sized peers in the long run unless it lands a strong ally that can supply cash and flexibility.

To put it mildly, Aurora Cannabis’s balance sheet is not pretty. The company had about CA$2.4 billion in goodwill at the end of the third quarter of its fiscal year 2020, which closed on March 31. Goodwill is an intangible asset that accounts for the purchase price of another company; in Aurora’s case, it’s mostly derived from its Danish and South American assets. The pot grower had CA$4.7 billion in total assets, which means goodwill made up roughly 51.2% of the company’s total. Currently, it has not incurred any impairments of goodwill or intangibles. But it may have to eventually write down its goodwill, which will definitely hurt the company’s bottom line.

What makes its financial situation worse is the fact that Aurora Cannabis still isn’t consistently profitable. During its third quarter, the company recorded a net loss of CA$137.4 million. This is only slightly down from CA$160.1 million in the prior-year period. The company also had roughly CA$613 million in long-term liabilities at the end of this quarter, while generating only $305 million in revenue during the trailing-12-month period. Aurora Cannabis is not an attractive stock until it cleans up its balance sheet.

Despite its woes over the past year, Aurora Cannabis’ stock could sink even lower. Unless the company manages to get access to large amounts of non-dilutive capital and…