Home Featured Could Aphria Be a Millionaire-Maker Stock?

Two years after Canada officially legalized recreational marijuana, investors are still searching for the winners. But investors looking to build lasting wealth in the sector have a better base to research which investments could make them rich today than they did two years ago…

A speculative sector like cannabis will particularly take time to play out, as government regulations play a large role in the business thesis. But there is more clarity — and some lower share prices — this long after the Canadian decision in October 2018. Along with disappointing returns, some businesses continue to struggle. But Canadian grower Aphria (NASDAQ:APHA) isn’t one of them.

Do it Buffett’s way

Becoming a millionaire from your investments is most likely accomplished by holding good businesses for many years. Warren Buffett likes businesses with large moats that can help compound their earnings over time, and that trade at what he considers good valuations.

The marijuana sector is less about moats and more about speculating on the potential market — so it’s difficult, if not impossible, to invest exactly as Buffet would. But valuations have certainly improved since the original hype drove up shares two years ago. Aphria, for example, has a current price-to-sales (P/S) ratio of about 5, down from more than 75 in late 2018. And Aphria has grown its sales compared to some peers, even as its share price moved down. 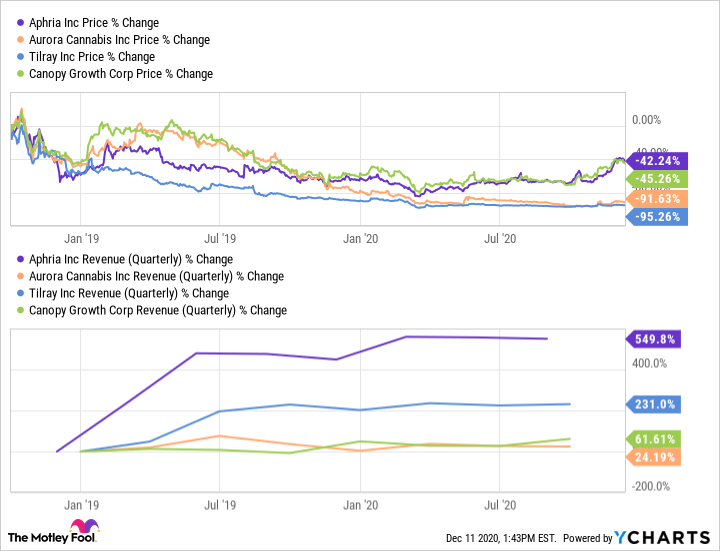 The thesis for an investment in Aphria hinges on growth in the recreational marijuana market. Supporters of legalization in the U.S. have had some success at the state level. Five U.S. states passed ballot initiatives concerning the legalization of marijuana in the recent election. Though federal legalization is still not a near-term likelihood, the investment thesis is based on it eventually occurring. Companies that want to be prepared are already building a framework. Beverage company Constellation Brands (NYSE:STZ), for example, added to its initial $4 billion investment in Canopy Growth (NASDAQ:CGC) with another almost $200 million invested through warrants earlier this year.

Aphria is also using a beverage company to grow in the U.S. It announced an important acquisition in the U.S. in early November. Behind the headlines of the purchase of craft brewer SweetWater Brewing Company is a path into the U.S. cannabis market. While the $300 million acquisition will be…