Aurora Cannabis (NYSE:ACB) and Canopy Growth (NYSE:CGC) are two of the bigger names in the cannabis industry. They’re both facing similar challenges — namely, how to keep growing amid rising competition while also getting closer to breakeven. Within the past 14 months, both companies also saw their CEOs depart.

While they have a lot in common, today I’ll look at what separates these two cannabis producers…

how their financials stack up against one another, which company has the brighter future moving forward, and their respective valuations. Most importantly, I’ll assess which of these two stocks is the better buy right now.

A look at their recent results

In first-quarter results for fiscal 2021, released Aug. 10, Canopy Growth reported a net loss of 128.3 million Canadian dollars. It’s an improvement from the CA$1.3 billion loss it incurred in the fourth quarter after recording impairment and restructuring charges totaling CA$743 million  , and it’s better than the CA$194.1 million loss the Ontario-based company incurred a year ago. It’s fair to say that Canopy Growth is showing improvement on its bottom line.

Aurora’s most recent results, out May 14, showed a net loss of CA$137.4 million for the third quarter. That was an improvement from the CA$160.2 million loss it incurred in the same period last year and from its second-quarter loss of CA$1.3 billion, which also featured impairment losses totalling more than CA$1 billion . Overall, both companies remain far from breakeven, but they’re making strides toward improving their bottom lines.

In terms of revenue, however, Canopy Growth has a clear advantage. In all but one of its past four quarters, the company has recorded revenue north of CA$100 million. Aurora, meanwhile, is yet to hit that threshold, and in three of its most recent reporting periods, sales remained below CA$76 million. And while its third-quarter sales numbers grew by 34% from the prior quarter, that was also skewed by the company’s very disappointing second-quarter results, in which it reported just CA$56 million in revenue, down 26% from the first quarter. Much of the CA$19.2 million decline in Q2 sales was due to price adjustments, revenue provisions, and returns totaling CA$10.6 million.

Although both companies have a long way to go before reaching profitability, Canopy Growth gets the edge when evaluating financials given its stronger and more consistent sales numbers.

Which company is in better shape moving forward?

Canopy Growth is banking on beverages and “Cannabis 2.0” sales to give its top line a boost this year, having already shipped out more than 1.2 million cans of marijuana beverages across Canada thus far. Management at Aurora, however, isn’t as convinced that drinks will be profitable, and instead looks to be more focused on cutting costs.

In a corporate update from June, Aurora noted its continued work on bringing down its expenses, targeting a positive adjusted earnings before income, taxes, depreciation, and amortization (EBITDA) number by the first quarter of fiscal 2021. Canopy Growth is also working on cutting costs, but hasn’t offered a specific timeline as to when investors can expect to see its numbers in the black.

However, profitability could be much more important for Aurora given its weaker cash position. In February, investment bank Ello Capital estimated that the pot producer could be just months away from running out of liquidity. As of the end of March, Aurora reported cash and cash equivalents totaling CA$230.2 million. Canopy Growth, meanwhile, had CA$975.9 million in cash and cash equivalents as of the end of June.

In terms of stability, Canopy Growth looks to be in a much safer and better position moving forward.

How their valuations look today

The one area where Aurora is the more appealing buy is price. The stock’s trading at a much lower multiple than its rival: 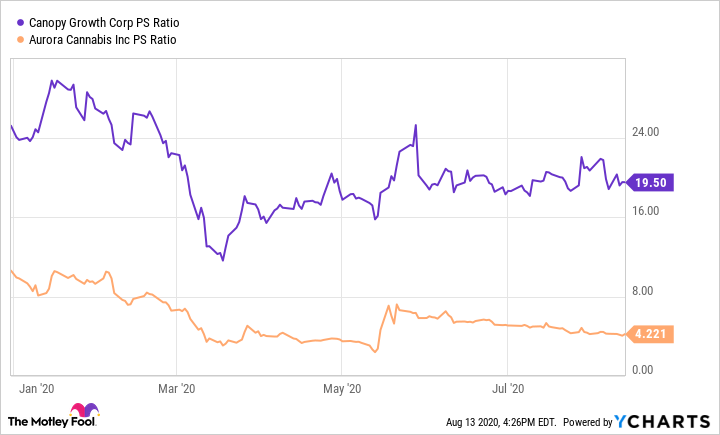 Investors are paying a large premium for Canopy Growth over Aurora right now, and it may not be warranted given that the former company isn’t exactly blowing the doors off with skyrocketing sales numbers. And with this being a transition year for Canopy Growth, it may be awhile before the company gets back to focusing on growth initiatives.