Aurora Cannabis (NYSE:ACB) has captured investors’ imaginations. Due in part to its aggressive acquisition strategy, the Canadian marijuana company has placed itself on track to become the largest producer in the world — at a time when the global cannabis market is enjoying explosive growth. In turn, Aurora’s stock is up more than 1,800% in the past three years, earning fortunes for its shareholders along the way.

If you’d like to learn more about Aurora Cannabis, the following five charts can help you quickly get up to speed on the core aspects of its business… 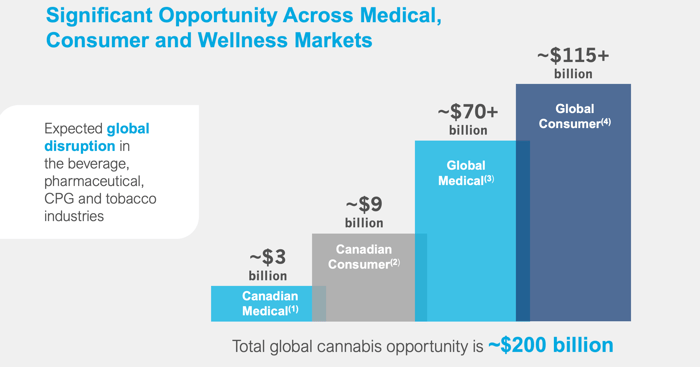 Aurora Cannabis, for its part, is targeting a total global cannabis market opportunity of approximately $200 billion. The company believes that cannabis will increasingly be used in place of other products currently produced by industries such as pharmaceuticals, alcohol, and tobacco. As the leading producer of marijuana, Aurora Cannabis stands to benefit more than perhaps any other company from this booming demand for cannabis.

No other company can match Aurora Cannabis’ peak production capacity. Aurora is on track to produce more than 625,000 kilograms of cannabis annually by 2020. Among its rivals, only Canopy Growth can claim even half that amount in peak production potential.

As such, Aurora Cannabis should enjoy scale advantages over its smaller competitors. Perhaps most importantly, the ability to spread its costs over a larger revenue base should help Aurora generate superior profit margins over time…