Home Featured 3 Reasons Why You Should Avoid Tilray (TLRY)

It’s been a volatile couple of years for shares of Tilray (TLRY).  The stock reached $300 in 2018 and last month, it hit $15, a new all-time low.  And though the stock has since stabilized, and is currently trading at about $19 per share, I am concerned that we haven’t seen the bottom yet…

The chart below shows that the short interest in shares of TLRY has increased to an all-time high as of January. 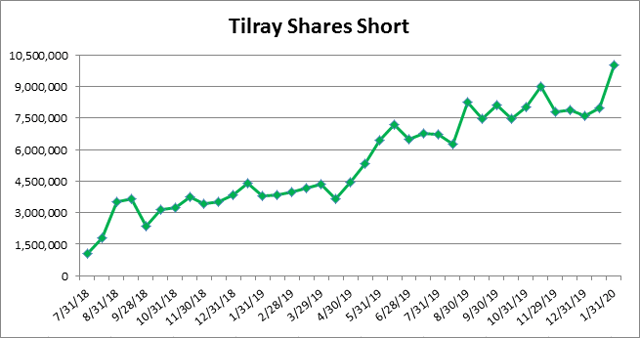 Now there are over 10 million shares short. Over the past 12 months, this has equated to a 165% increase in short interest.

Despite the skyrocketing short interest in the stock, we are also concerned with the amount of cash TLRY is burning through. In the most recent 10-Q filing, TLRY went through $167 million in cash from operations during the first three quarters of 2019. This is an increase of over $100 million, up from $26 million just a year earlier. Capital expenditures were $50 million up from $12 million during the first three quarters of 2018. They also have almost $214 million spent on acquisitions and other ventures.

TLRY used almost half a billion dollars in roughly 9 months. We don’t expect the companies spending habits to continue like this (they can’t afford it) but even if they burn thought between $50-60 million per quarter, that still equates to well over $200 million for this year.

The company ended Q3 2019 with $122 million in cash and investments. If they needed to raise an additional $200 million for this year that would mean an additional 10 million shares would need to be sold resulting in harsh dilution.

On top of all these 2 major red flags, in a…