Aurora Cannabis (ACB) and Canopy Growth (NYSE:CGC) are two of the biggest names in the cannabis industry today. And they’re probably among the first names that come to mind when thinking of the industry, but that doesn’t make them great buys. Both companies have struggled with profitability and growing their sales in recent quarters. Although they still have tremendous potential, they’re also very risky stocks to own. Investors are better off buying shares of…

Curaleaf Holdings (OTC:CURL.F), and here’s why.

On May 20, the Massachusetts-based company released its amended quarterly results for the first quarter of 2020. In Q1, its total revenue of $96.5 million grew by 28% from the previous quarter and increased 174% from a year ago. By comparison, Aurora generated just 75.5 million Canadian dollars in its third-quarter results, while Canopy Growth reported quarterly revenue of CA$107.9 million in the results it released on May 29th.

Curaleaf’s already ahead of the industry leaders in Canada in terms of sales, and what makes it an even more attractive buy is that it’s continuing to expand into hotter markets. On May 11, Curaleaf announced that it was partnering with Mango Cannabis, a company that owns medical marijuana dispensaries in Oklahoma and that will distribute Curaleaf’s Select products there. Oklahoma’s been one of the hottest markets for medical marijuana in the country. The state’s coming off a record month in April, where sales of $61.4 million generated state taxes of $9.8 million for the month. That’s up 38% from March’s record of $7.8 million in tax revenue.

Another hot market that Curaleaf’s getting into is Colorado. In March, the company announced it would be acquiring BlueKudu, which produces premium edible products in the state. Curaleaf’s acquisition of Select last year gave the company a strong footprint in California and other states on the west coast. The move into Colorado will give Curaleaf a position in the next best market outside of the Golden State.

CEO Joseph Lusardi sees it as a great opportunity to continue expanding the Select brand, noting that Colorado’s the second-largest market for pot in the country and that “BlueKudu’s established production and distribution capabilities will allow Curaleaf to seamlessly enter the market and expand the Select brand presence in the state of Colorado.”

With Curaleaf expanding into some hot markets and already generating tremendous sales, it’s in a good position to establish itself as the undisputed industry leader this year.

Curaleaf’s been generating profits, too

Not only are its sales better, but Curaleaf’s already in a better position in terms of profitability than both Aurora and Canopy Growth.

Should you buy Curaleaf today?

In terms of profitability, sales growth, and opportunities, it’s clear that Curaleaf is the better buy when compared to Aurora and Canopy Growth. But whether Curaleaf is a good buy right now involves assessing its current valuation and where the stock may be headed in the months to come.

When looking at the company’s price-to-sales (P/S) multiple, Curaleaf trades at around six times its revenue. While that’s a bit rich for some industries, it’s fairly reasonable in the cannabis industry. It’s about where the stock’s been for much of the past year, outside of March’s market crash and the recovery that’s taken place since then: 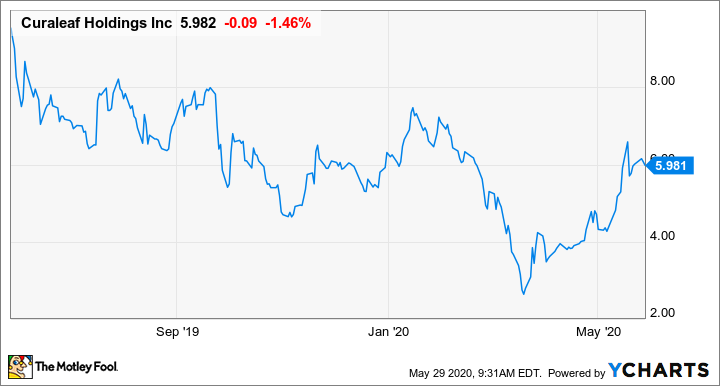 If you’re bullish on the company’s future, and it’s hard not to be given the markets that it’s expanding into, then it’s reasonable to expect that shares of Curaleaf are likely going to rise if this P/S multiple remains intact. The one wrinkle, however, is COVID-19 and how much it will weigh down the economy and Curaleaf’s sales in 2020.

Curaleaf is one of the…